Before I start this article, I need to define a couple of terms:

All files are divided into two categories – plain text and binary.

Plain text files as the name suggests just contains text. They cannot contain images, sound, video or any form of text styling unless they mark it up. Examples of these files include .txt, .ini, .csv, .html, .php. These files can be opened in your system’s default plain text editor such as Notepad on Windows and will load and display fine.

Binary files however can store a much wider range of data. Your camera photos, mp3s and videos are all binary files. Rather than limit the data storage to just text, binary files can make use of a larger range of encoding which means that we can’t view these files properly in a plain text editor. This is shown in the image below, in which I’ve tried to load a bitmap image into Notepad.

By contrast, loading a binary file in a plain text editor is not a good idea

Hex Editors can display and edit binary data in a very helpful and effective way. They are not limited to text characters and can be used to display and edit the full range of variations in each byte. Unlike text editors which display binary data badly and don’t support changing the value of non text data, hex editors are not hindered by these problems. 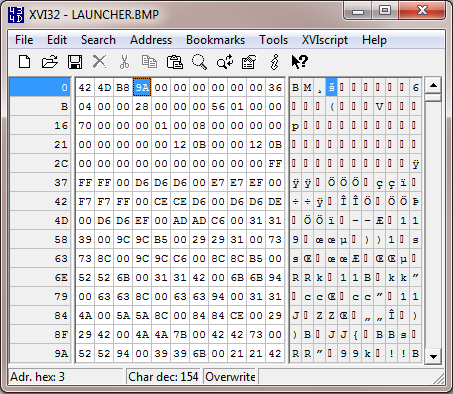 XVI32 is a freeware hex editor for Windows

My personal favourite free hex editor is XVI32 which can be downloaded for free on Windows. It’s quite a lightweight and functional hex editor and while there are many hex editors out there offering a greater range of features, I like the simplicity and straightforwardness of XVI32.

In the above screen shot we can see three columns. The left and thin column is the line number displayed in hex. The number shown represents the index or offset of the first entry on that line, for example B means 11 as a decimal and if you count across the boxes in either of the other two columns you’ll see that they are also 11 boxes across. These line groupings do not exist in the actual file, this is merely just how its displayed in the editor, a bit like word wrapping text.

So why is hex useful? Why not represent the values of each byte as a decimal?

To convert between decimal and hexadecimal you can use the built in calculator on Windows (or use a site like this). Depending on your version of Windows you may need to change to either scientific or programmer mode before the hex and decimal options are available. To convert a number, type it into one mode then select the other mode. For example: 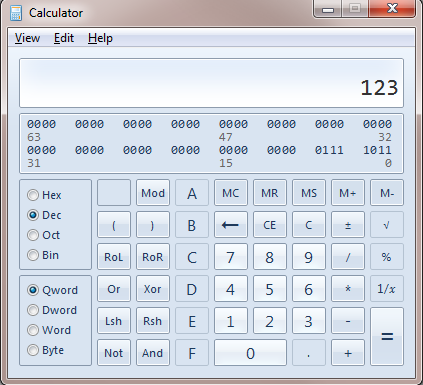 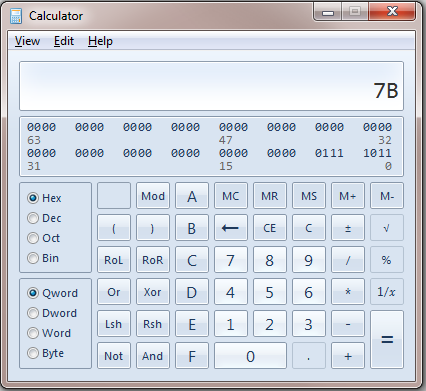